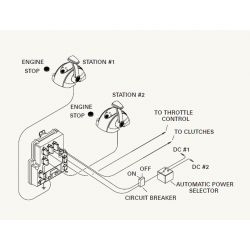 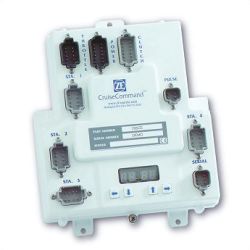 The CruiseCommand is an all electronic engine control with LED technology. A plug and play control system, the CruiseCommand processor provides an electronic link integrating your helm mounted engine controls and your engines.
It was developed for vessels with electronically throttled engines and solenoid controlled shifting. Cruise Command systems are preprogrammed at the factory for ease of installation.

Push Button Set Up: Push button set up makes configuring the parameters for your controls easier than ever before. Simply enter in the parameter code and the processor instantly makes the correct adjustments. Changing configurations at a later time to meet new specifications is just as easy.

Start Interlock: Our neutral start interlock feature prevents engine start up unless controls are on and in neutral and a station is in command.

Sequencing Technology: Speed/shift sequence protection allows shifting from full ahead to full astern in one motion while preventing damage to the engine or gear. Designed with safety in mind, this sequencing technologyallows you to respond instantly to emergency situations.

Multiple Control Stations: The processor has the capability of supporting multiple controlstations, which allows use of an optional handheld control unit, in addition to mounted control heads. The CruiseCommand provides connections for four remote control stations.