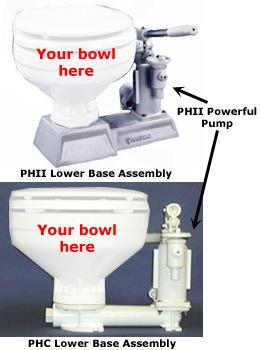 Now you can upgrade almost any marine head to a Raritan - the most respected name in marine sanitation!

If you have a marine head that looks nice, but doesn't function all that well, the Raritan PHII LBA or PHC LBA is the perfect solution for you.

The PHII LBA is essentially the Lower Base Assembly for the Raritan PHII toilet.

The PHC LBA is the lower base assembly of the Raritan Compact II toilet with the PHII pump.

You can use your existing bowl, seat and lid...no reason to send it to the land fill. Plus, you save on shipping as the heaviest part of the toilet is the bowl!

Most marine head bowls are made by the same manufacturer and have a cross shape, 4 bolt mounting pattern. You simply unbolt your bowl from the existing lower assembly and install the PHII lower assembly or the PHC lower assembly. Voila! You have the reliability of a Raritan at a lower price and lower impact on the planet.

Click here for a drawing of the hole pattern to compare to your bowl.

The PHII Lower Base Assembly is 15 3/8 inches wide and can be mounted for pumping on either the left or the right. The PHII has been top rated by Practical Sailor for over two decades.

Don't have room for the PHII LBA The PHC Lower Base Assembly is smaller and the pump handle is shorter than the PHII for installation in tighter spaces. Like the PHII, it can also be set up for pumping on the left or the right. Both the PHII and PHC LBA will accommodate a marine size or larger household size bowl.

This product was the brainchild of the ever popular head mistress, Peggie Hall. Leave it to Peggie to come up with an ingenious idea so that everyone can have the best marine toilet on the market. If you are interested in learning more about marine sanitation, but have been afraid to ask, you can order Peggie's book Get Rid of Boat Odors.