Serving sailors online since 1997
Contact us
Order status
Due to supply chain disruptions and new warehouse safety measures some shipments may be delayed up to 72 hours.
| Ancor | 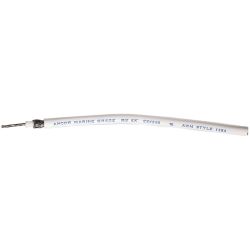 
Heavy on the technical side...
RG = Radio Guide, an obsolete designation, but still useful for identifying compatible connectors.

Coaxial cable is used as a transmission line for radio frequency signals.
Its applications include feedlines connecting radio transmitters and receivers with their antennas, computer network (Internet) connections, and distributing cable television signals.
One advantage of coaxial over other types of radio transmission line is that in a high quality coaxial cable, the electromagnetic field carrying the signal exists only in the space between the inner and outer conductors. This allows coaxial cable runs to be installed next to metal objects such - as rain gutters outside a building - without the power losses that occur in other types of transmission lines.
Importantly in marine applications, coaxial cable also provides protection of the signal from external electromagnetic interference from other nearby sources.

The ends of coaxial cables usually terminate with connectors. Coaxial connectors are designed to maintain a coaxial form across the connection and have the same impedance as the attached cable.
Connectors are usually plated with high-conductivity metals such as silver or gold. Due to the skin effect, the RF signal is only carried by the plating at higher frequencies and does not penetrate to the connector body. Silver connectors can tarnish quickly, and the resulting silver sulfide produced is poorly conductive - degrading connector performance - making tarnish proof gold-plated connectors a better choice for this application.